Well amid the busy week I am bringing myself to write..Well, one of the reasons behind it is that an old friend had asked if I wanna help in doing books review for books written in Malay (though I believe her Malay is considered modest, she insisted that she speaks and write better in English hehe)..So I have to start practicing to write more frequently (as I have now started reading more frequently as well hehe)..

Malaysians (and perhaps the world) are now reading and following chains of events after the rather misunderstood event (in my opinion) "I want to Touch a Dog" held last Sunday 19th October 2014 over at the Central Park One Utama Petaling Jaya, Selangor. From what I have read, this event was organized with the hope that Muslims will have a better understanding about the "hukum" of touching a dog and how to "cleanse" oneself after touching a dog.. 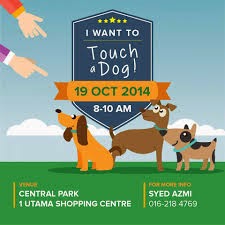 To many cruelty towards dogs were shared and went viral in the social media (well, cats and other animals too - but lately in Malaysia it seemed that dogs became a more "prominent" victim)..And so it is made known that the event was more of trying to steer away the stigma that dogs are one of the animals that deserves to be subject of cruelty by whoever (not only Muslims)..

But it is known that Muslims do not condone the act of having dogs as pets (or to have any unnecessary contacts with them) because it is considered "Najis Mughallazah" (heavy impurities-forgive me for the direct translation).. And therefore one MUST cleanse themselves thoroughly before performing ibadah, after touching a dog (or any other Najis Mughallazah for that matters)..One of a simple explanation about how to clean oneself is as such:

From what I read and heard:

1. A formal request was sent to the religious department to obtain permission in organizing the event.
2. An "ustaz (religious officer) was invited to give a talk about the "hukum" and how to cleanse oneself after touching a dog. 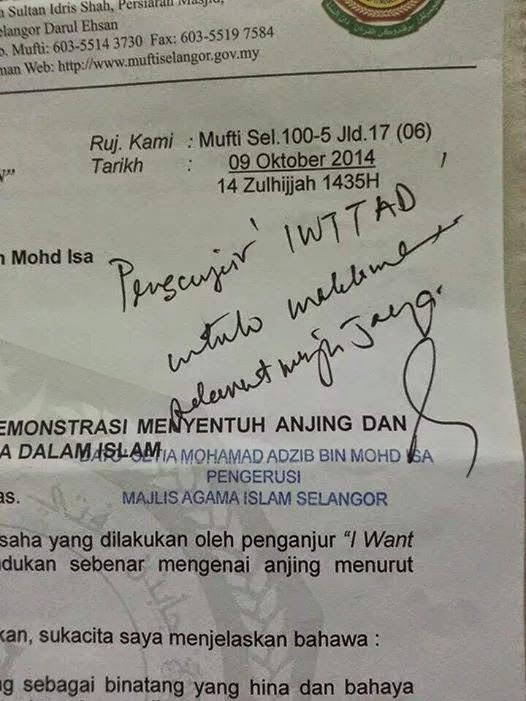 So yes, having understood the background I totally agree with the event..It is simple - you don't have to be cruel to dogs just because you can't touch them..And you can touch them if the situation arises (helping the dogs etc..)

But alas, you can not control the crowd who came with different agendas. Some were there to know more about dogs, some came with the intention of touching dogs  to subside the fear of dogs in them), some came to hug and kiss the dogs (well rest assured the dogs are of friendly manner, else you will be getting a bigger ruckus :))..

Though I must say that perhaps the organizer did start off with a good intention in mind..However, there is no way he can control the crowds which were really big..He had expected 60 however, almost 1000 (or perhaps more turned up)..And it turned out to be uglier than anyone could ever thought off....

The next thing you know..Religious department denied approving the event..And rumors..Ugly rumors start spreading via the social media..Comments..Nasty comments were everywhere..And the organizer even received death threats..

Sadly that is how the mentality of most of the Malaysians..Death threats..Calling out names..Are so uncalled for..I am not siding any parties though I do feel perhaps this can be prevented in many ways possible..

Naming of the event - Well instead of I want to touch a Dog perhaps another suitable name could be suggested..Such as Dogs - in Islamic Perspective (hehehe I know it sounded too formal, or perhaps suggesting that it is a more serious talk kinda event instead of a more simple, leisure and casual kinda thing)..A Day with a Dog..Dogs & Muslims..etc..
*For some reason, for this event, the crowds choose to understand it literally..As in "touch" a dog..Then again the organizers were doing the same thing and so perhaps they thought that it is okay..Own's perception and interpretation is something the organizer can' control..

Religious Department could have worked together with the organizer in ensuring a more "secured" environment is obtainable and desired..This helps to control the crowd and at the same ensuring that visitors and participants understood the event and its objectives very well..while most people does not believe that this is an agenda to "liberalized" them, it is expected that some may have interpreted the objectives of the event wrongly..

Like I said I am neither siding nor blaming anybody..But indeed this should serve as an example of how a simple event with a great objectives can turn ugly without a proper understanding and supervision..

As for me I have nothing against dogs, as I have one too..But my favorite dog does not need me to clean myself as per the guide above..My dog may not be that cute and is sometime a bit scaredy cat (or dog in this case)..But I am happy with him regardless.. 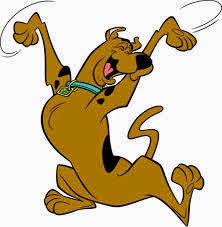 I love you Scooby Doo..
Posted by GrimlyGeekyGirlNext Door at 6:55 PM 1 comment:

Is it possible to grieve for those whom you have never met..have never known..

Lately there's been a lot of turmoil surrounding the nation and the world...


It started of with the missing of MH370 on 8th of March 2014..Sadly up until now, even with all the help which was given, there's no definite answer as to what happen to the flight..Mixed reactions were obtained through social media and sadly most of it were not encouraging at all..Not to the victims and not to the families and friends..Out of a sudden there's too many over night Aeronautical Engineer, Pilots, Navigation Experts etc who claimed to have known what had happened or how it had happened and so it ended with the infamous bickering and the blame game continues...
The world joins in grieving with the family and friends of those boarding this flight.. Miss Maira Elizabeth Nari, the eldest child of the chief steward Andrew Nari has never failed to tweet about her hopes and wishes for her dad to come and that indeed has captured the attention and the hearts of everyone who has never failed to follow her twitter account worldwide..

This contributes to a warmth gesture from the Liverpool Team themselves..


Oh I love you Liverpool - You Never Walk Alone :)

Then once the ongoing war which is taking place is between Israel & Palestine..Too many distraught pictures were shared via social media..Now I know that it's meant  to create awareness about what is going on but I am sorry for I can't bear to have a look at the pictures and I believe that's not the only way for me to show my support to Gaza.. One can clearly see that that injustice is taking place..And that it is a new form of genocide..However it is sad to see that the strong and powerful nations just stand aside (if not helping the Israel) and allow such massacre to take place..

Then just a few weeks ago, another mishap befall MAS when MH17 was gunned down in Russia..Negotiations was done between the two countries as Malaysia is claiming the bodies and black box..Again many speculations were heard and seen via the social media..And it is very tearing when you read the families plead not to disclose the pictures of the splattered bodies which was going viral through all social media possible..

Well, what has all of the above got to do with the subject up there?.. While the world are grieving about the incidents which had happened..There are also those who on the contrary, is creating a fuss on how 'fake' the feelings shown by strangers who were expressing their prayers and grief via social media..

And there were some posts which I came across via my FB questioning the sincerity of those who cried and those who sent the prayers and condolences messages for the victim's next of kin and friends..These people were accused of being fake as they have no direct relationship or whatsoever with the victims..And I wonder..

Sadness and tears..Is there some sort of pre-requisite that states only family member or friends who are allowed to mourn the loss of loved ones..And that those who don't even know them should not at all feel the grief?

Posted by GrimlyGeekyGirlNext Door at 9:05 PM No comments:

GrimlyGeekyGirlNext Door
Pretty Much Everywhere, Pretty Much Everywhere, Malaysia
Geeky Girl Next Door who is a fashion victim eversince cottons were weaved and silks were dyed. Couldn't figure out why wearing make-up can take hours. A Scorpion born in the Year of The Ram. Enjoy coffee & chocolates very much! Like to be surrounded by people though I enjoy my privacy very much, thank you. I am either an angel or the devil, take your pick!